NH Industries (NHI), the three-way joint venture which manufactures the NH90 military helicopter, is working on future upgrades for the type, even as it signs a deal with France for a new special forces variant.

NH Industries (NHI), the three-way joint venture which manufactures the NH90 military helicopter, is working on future upgrades for the type, even as it signs a deal with France for a new special forces variant.

Paris on 12 October placed a long-awaited contract covering the development of a version of the NH90 TTH for the French army, known as TFRA Standard 2. The changes will be applied to the 10 remaining examples of the troop transport helicopter Paris has on order; five will arrive in 2025, with the remainder following in 2026.

Modifications over France’s baseline TTH variant include the addition of Safran’s new EuroFLIR electro-optical/infrared imaging system, with displays and controls available for the helicopter’s entire crew.

Although billed as a special forces variant, the French DGA procurement agency sees potential to roll out the updates across the army’s entire NH90 fleet.

“Most of these new capabilities will also be useful to the Army Light Aviation to increase the operational coverage of the TTH,” it says.

As part of the development work, all the upgraded helicopters will also be pre-equipped with the wiring and other hardware to incorporate Safran’s Eurofl’Eye infrared-based distributed aperture system, which will be linked to a new digital version of the Thales TopOwl helmet-mounted display. The innovations are designed to significantly improve visibility in degraded visual environments.

NHI says the addition of Eurofl’Eye will be a “key” development, but does not offer a timeline for its deployment, and the system has so far not been ordered by the DGA.

The planned modifications will allow the combination of the DAS and TopOwl “to be installed as soon as this equipment is fully developed and contracted”, it says.

Other NH90 operators may also be interested in the modification; Australia and Belgium both participated in an 18-month-long preparatory study of the special forces version prior to its launch according to the DGA.

Meanwhile, NHI is continuing to ready the helicopter’s latest software release, SWR2, for initial qualification next year, with that process to run until 2023 for later variants.

Updates required for the initial French TFRA version will be an addition to that process, says NHI.

“That capability will be developed only for France at the start but might be, on request, shared with a larger NH90 customer community,” the consortium says.

An additional future software release, SWR3, is currently being discussed by NATO helicopter management agency NAHEMA, the 14 NH90 operator nations and NHI. The manufacturer last year indicated that SWR3 would arrive in 2025.

Further out, a mid-life upgrade of the NH90 is still being considered, although NHI declines to provide details beyond saying that it maintains a dialogue with NAHEMA and operator nations over the “future evolution” of the helicopter.

“Evaluation of a potential mid-life upgrade is part of such continuous exchanges as well as other key considerations to answer evolving customer operational needs,” says NHI. 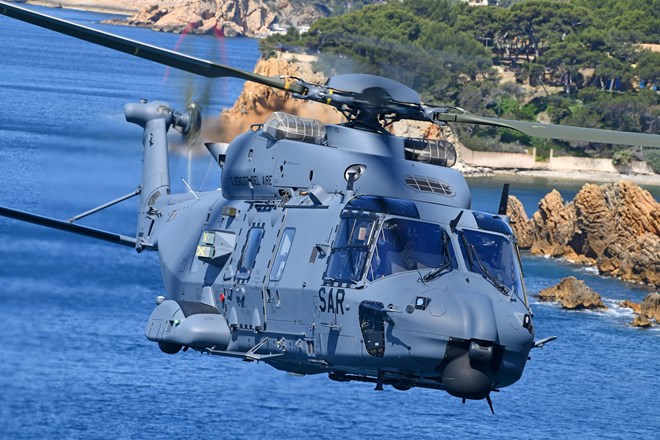 Meanwhile, the Spanish air force on 14 October received its first of 12 NH90 TTH configured for combat search and rescue missions.

To replace an ageing fleet of Airbus Helicopters AS332 Super Pumas, the new helicopters will be based at Cuatro Vientos near Madrid.

In all Spain has ordered 45 NH90s – all TTH variants – for operation by its three armed services; the army has already received 13 units.

A total of 566 NH90 helicopters have been ordered by 14 nations, with only Qatar yet to receive any of its helicopters.